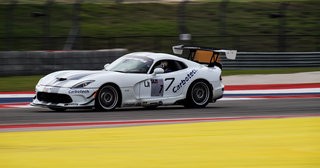 How do you get from SCCA Time Trials Nationals to Super Lap Battle?

That’s how it worked for Chris Ingle, who represented SCCA with a top five finish in the prestigious Super Lap Battle at Circuit of the Americas last weekend, February 14-16. Ingle earned his chance to take on the best that time trials have to offer by being the fastest overall driver at the 2019 Tire Rack SCCA Time Trials Nationals powered by Hagerty.

As such, he took his nearly stock White Knight Racing Dodge SRT Viper GS to the Limited class at Super Lap Battle, which allows (unironically) unlimited engine modifications, engine swaps, and professional drivers in the class.

His experience in SCCA Time Trials brought more than just a license and entry fee for Ingle. It also brought a change in mindset for the road racer-turned-time trials guru and proved that a competitive run at SCCA’s events will prepare a driver for any event across the country, professional or not.

“It says a lot,” Ingle said. “I was not a time trial-er, I was a road racer. Doing time trials, you have to have a little bit different mentality and over the past couple of years, doing stuff with (SCCA), it’s helped me to flip that switch to more of a pure qualifying mode than road racing mode.”

Ingle made a special trip to COTA just two weeks ago to take part in the track day and learn the track. Of course, he did that in a borrowed Corvette, and not his familiar Viper – but it was still close enough to hit his original goal for the event.

“It was just a Corvette convertible with mismatched tires, out here just flogging it!” Ingle said. “I didn’t want to come here and get embarrassed. And I didn’t figure I would, I know I can drive, lots of track miles. The first goal at every track event is to have a good time. Gotta do that. If you’re not having a good time, why are you doing this?”

So with the competition underway last weekend, it was time to figure out where he stacked up.

“Today was to learn the track with this car and these tires and be as competitive as humanly possible,” Ingle said. “I knew coming out here that there would be some monster machines that I’d go up against. I knew that. But I said, this is a competitive car. It’s a good car. Do the very best you can with it, be safe with it, bring it back with all four wheels and just have a freaking good time.”

And it took some work! An exhaust upgrade led to some small mechanical issues early on, but with diagnostic help from a fellow competitor, it turned out to be an easy fix.

“This thing right here has pretty much been bulletproof on what I wanted to do,” Ingle said of his trusty Viper. “We had some O2 sensor issues. In fact, the headers that I put on there, I had my doubts about changing from a bone stock configuration, and it got apparently really hot where the O2 sensor wires were and melted them, which shorted it out. We couldn’t figure out what the problem was. I started looking through fuses and what fuses were blown and replacing those and it’s running again.”

With only two sessions missed throughout the weekend, it was a success – not just in the results, but in the fun factor. And by default, Ingle’s performance at Super Lap Battle proved that success at SCCA Time Trials events hold up across the board.

But, as always, racing is a team sport, even if it seems like an individual effort.

“Mike Puskar with CarboTech has been, holy cow, absolutely fantastic at this stuff,” Ingle said. “I normally run Hoosiers, but Yokohama has been fantastic at this. (SCCA) chipped in for a set (as part of the reward package at TT Nats), thank you so much because it took a couple of sessions to get used to them. Those are the big things, and of course my wife Jaquelyn who lets me do this stuff.”

It made an impact on those in the know.

“This is big time time attack,” Heyward Wagner, SCCA Sr. Director, Marketing and Experiential Programs, said. “Chris showed up and represented the SCCA TT program brilliantly, not only keeping pace, but also in showing the skills developed with SCCA to be able to get his best times down when it counted most.”

At the end of the day, Ingle’s run proved three things. First, when it comes to wheeling a car on track, he’s as good as anyone. Secondly, that the best way to advance into the upper echelon of Time Attack activities across the country is through SCCA’s Time Trial program. And thirdly, if you can compete with the best at SCCA events, you can compete with the best that anyone can offer.