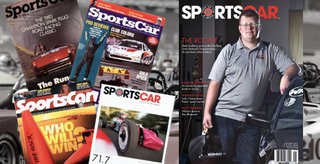 As the official publication of the Sports Car Club of America®, SportsCar® magazine has been in circulation since 1944, then known as Sport Wagon, and since 1984 one company has published every issue. With the recently mailed February 2017 issue the Irvine, California based Racer Media & Marketing, Inc. has commenced its 10th consecutive contract to publish the magazine on behalf of the SCCA®.

"I've been in the media and publishing business since the mid-1970s, working on magazines like FORMULA, Finish Line for the SCCA's Cal Club region, Alfa Owner for the Alfa Romeo Owner's Club and il Quadrafoglio for Alfa Romeo" said Racer Media & Marketing founder, President and Executive Publisher, Paul Pfanner. "But, I have to give a lot of credit for all the relationships and the market-leading position that we've been able to build over the years to winning that first publishing contract with the SCCA. It has been an honor and a pleasure to work with the SCCA National Office staff directors and members, and we simply couldn't ask for better partners."

Pfanner began publishing SportsCar with the January 1984 issue under the auspices of Pfanner+Catheron+Brown Publications, which eventually became Pfanner Communications, Inc., and then merged with sister company Racer Communications, Inc., which published RACER magazine and RACER.com. The majority of Racer Communications, Inc. was purchased by Haymarket Publishing in January 2001, and Pfanner continued to serve as president under Haymarket majority ownership. Pfanner departed the company at the end of 2005 to re-launch Pfanner Communications as a marketing and brand consultancy in partnership with long-time SportsCar and RACER publisher, Bill Sparks. Pfanner and Sparks returned to repurchase the group in March 2012, renaming it Racer Media & Marketing, Inc. Across all those iterations, the SportsCar publishing contract has remained within the same core publishing team.

"We've remained as publishers of SportsCar for 33 years certainly due to the exceptional service, quality and partnership our team has been able to deliver to the SCCA," says Pfanner. "Many publishers might have been able to offer the same thing. However, no publisher has ever matched the sustained passion and knowledge we bring as genuine racers and life-long SCCA-members to working daily with SportsCar. There's just no substitute for that level of commitment."

Pfanner was an SCCA Formula Ford competitor and served as SportsCar's art director, editor and racecar track test driver for the prior publisher from 1978 through 1979 before starting his own company. SportsCar's current editor, Philip Royle, is the longest-serving editor in SportsCar history, having been with the company since 2005. Both Royle and SportsCar Associate Editor, Jason Isley are SCCA Club racers and autocrossers. In 2015, Royle earned an SCCA National Championship Runoffs® National Championship victory in the T4 class while Isley has scored three consecutive SCCA Runoffs H Production class silver medals (2014-2016) and a pole position in 2015. Isley also has four SCCA Solo® National Championships in the mid-2000s to his credit.

In commenting on the company's milestone 10th Publishing Agreement with the SCCA, Royle said: "SportsCar magazine is a vibrant record of SCCA's remarkable history. As an active member of the SCCA, I take my job as the editor of SportsCar seriously, not only because the magazine is read by SCCA's highly engaged participant members each month, but also because it acts as witness to today's great accomplishments within the Club. The records that are broken, the titles that are won and the safety innovations that are created are all chronicled in SportsCar, placing these modern-day SCCA legends alongside the likes of Mark Donohue, Paul Newman and Jim Downing in the annals of history."

Editor-in-chief of both RACER and SportsCar, Laurence Foster is in unique position to view where SportsCar resides among motorsports publications.

"Every day we have the privilege of covering motorsport from the highest levels to amateur racers of the SCCA who compete not for financial reward but for a true love of the sport," says Foster. "That's something worth celebrating, and it has always been the mission of SportsCar to represent and record that passion."

SportsCar is published 12 times annually, and is included as part of every full membership in the Sports Car Club of America. With 65,000 full or part-time members in the club, SportsCar is audited by the Alliance for Audited Media with more than 35,000 print copies distributed per month. Multiple-member households (that are a common trait of SCCA membership) only receive one copy.